Waterford was originally called Avery's Mills, after Paul Averill, who built the first grist mill around 1799. At this time the millpond was created by building a dam on Nanticoke Creek. As the mill's owners changed so did the names. Avery's Mills became Sayles Mills, then Sovereign's Mills and finally in 1816 Lodersville, after Job Loder. The name was permanently changed to Waterford when a post-office was built around 1826.

The Canada Southern Railroad, connecting Buffalo to Detroit, arrived in Waterford in 1871 and the community continued to flourish. In the 1880's Waterford had reached a high peak of prosperity. Business and agriculture had thrived and when one day a stranger inquired of one of the citizens, "who lives in all those grand houses?" the reply was "retired farmers," which was largely true.

Anyone visiting Waterford today will be impressed by the preservation of these stately homes. The town also boasts many kilometres of walking trails around the Waterford ponds. The Dominion Telephone Company built it's factory here in 1909, but only remained open for four years before closing. It is now the home of the Waterford Antique Market, one of Ontario's largest flea markets. The old Waterford train station has also been restored and presently is used as a quilt store. The Waterford Heritage and Agricultural Museum in downtown Waterford was once a former pickle factory. The museum is also home to the Norfolk County Agricultural Hall of Fame.

The Regions of Ontario 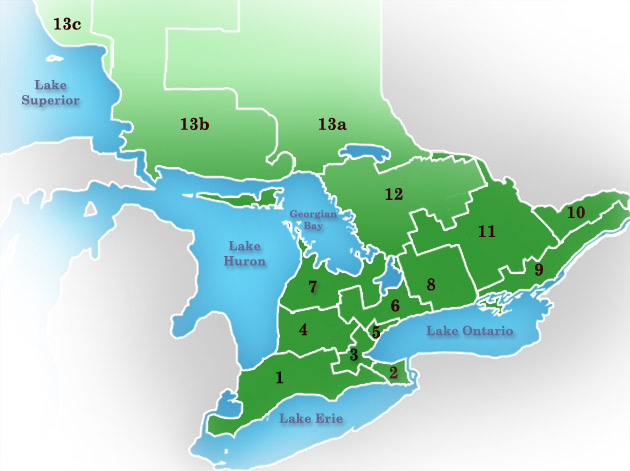